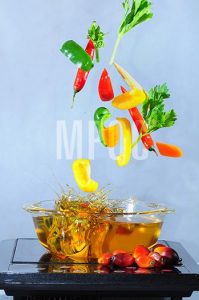 The most important characteristic of fat used for frying is its ability to withstand the high temperature used, without excessive chemical change. Frying is usually carried out at a temperature of about 180°C. At this temperature, the more unsaturated oils tend to oxidize and either breakdown or polymerize quite rapidly. Oils containing significant levels of linoleic acid are not recommended for frying, unless they have been hydrogenated to reduce the content of these labile components.

It is used domestically, in restaurants, fast food outlets and in large scale preparation of fried potato products and other snack foods in large scale food manufacture.

Palm oil and palm kernel oil are highly suitable components of margarines of the various types because of its... read more